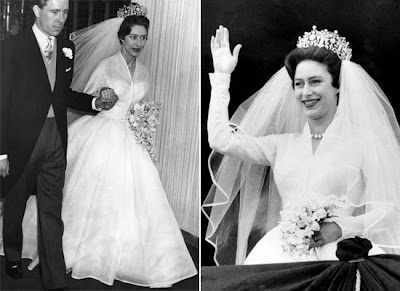 Princess Margaret wore a dress created by Norman Hartnell.at her wedding to Anthony Armstrong Jones in 1960. 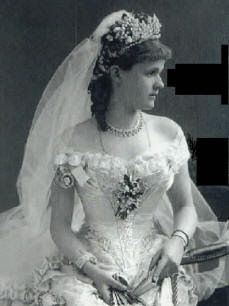 The Duchess of Albany married Prince Leopold I (Queen Victoria's youngest son) in 1905. The bride wore a crown of flowers and jewels and the dress was enriched with royal laces and embroidery. 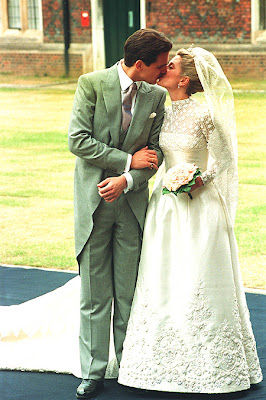 Marie- Chantal and Prince Pavlos of Greece, July, 1st 1995. The bride is wearing Valentino silk gown with applied roses and an embroidered corset. The Chantily lace veil is 4,5 m long and embroidered with butterflies. The diamond tiara was borrowed from Queen Mary Ann, the mother of the groom. 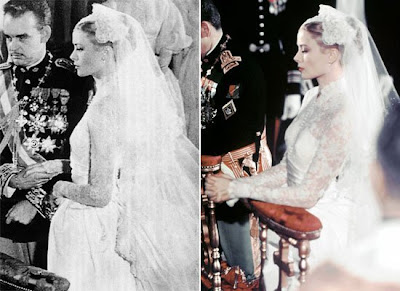 Grace Kelly and her prince, Rainier al III-lea - 1956. The corset was covered in fitted lace that also covered her arms and neck. Helen Rose, designer for MGM, created this dress using 23 m of silk taffeta, 90 m of tulle and 274 m of Valenciennes lace. 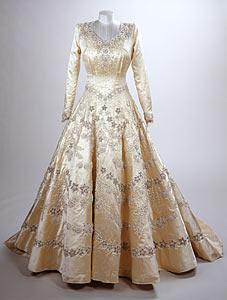 The Queen Mother at her wedding in 1923 wore a dress made from chiffon moiré, with an extremely simple design. The dress was created by Madame Handley Seymour, one of the most visionary designers of the day. The dress had two trains: one was made from tulle and attached to the shoulders and the other was attached at the waist.


I've presented here a few of the royal wedding dresses that caught my eye. All are special in their own way, although we seem to be more prudent about the amount of skin a royal bride shows nowadays than we were in the 19th century. I agree they should not be over-revealing but I expected a little more edge from UK's newest princess. Her dress seems like a combination between Princess Margaret's and Grace Kelly's. But her veil was truly breathtaking!
Posted by Sabina Georgescu at 12:03

Promiss I'll keep you posted! Just sign up for the newsletter here!